After appearing on the jazz scene as a prodigiously talented teenager in the mid 1950s, Lee Morgan’s swaggering, bluesy trumpet playing lit up a huge number of the ‘60s’ most memorable hard bop sessions on Blue Note Records including those with Art Blakey, John Coltrane & Joe Henderson.

Whilst perhaps not quite as influential a soloist as Clifford Brown or Freddie Hubbard, his albums are routinely packed with vibrant, catchy tunes, often penned by Morgan himself, and brought to life with fabulous supporting casts of musicians.

His most notable sideman role was with Art Blakey and The Jazz Messengers, but he played with many of the mid-century jazz greats before his sad and dramatic death. 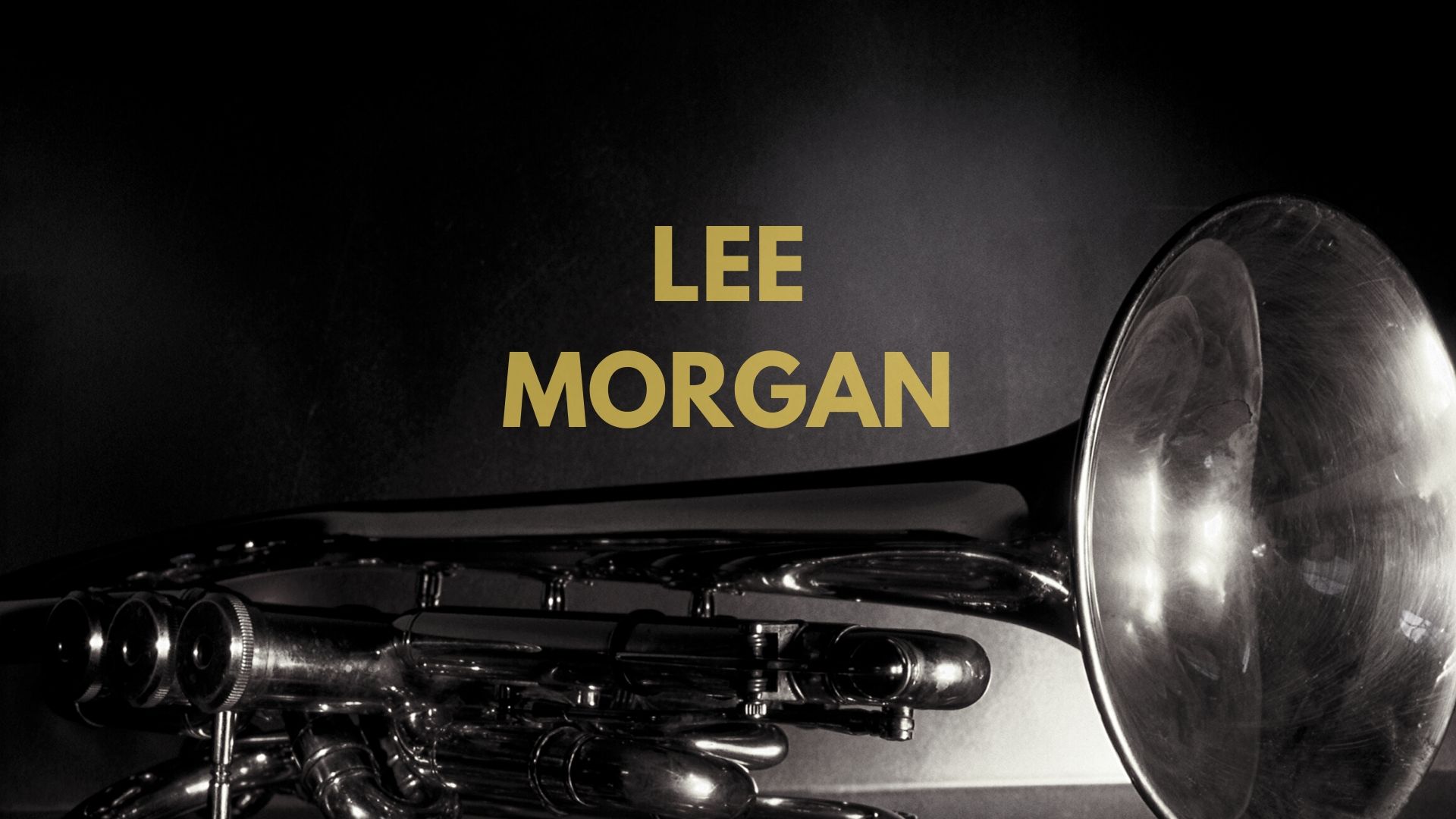 Edward Lee Morgan was born on 10 July 1938 in Philadelphia, Pennsylvania, one of many great jazz musicians to emerge from the city.

After being given a trumpet for his birthday by his sister, he took a few lessons as a talented teenager from the great Clifford Brown, the primary influence upon his style.

Brown was tragically killed in a car crash in 1956, the year that Morgan’s recording career began, and many considered the younger man to be Brown’s heir apparent as the next major trumpet stylist.

He made his first recordings as a bandleader aged just 17 for Blue Note and Savoy. Introducing Lee Morgan (1956) is a fun, boppish session with Hank Mobley’s Quintet, featuring a top ‘50s rhythm section of Hank Jones, Doug Watkins and Art Taylor.

He joined Dizzy Gillespie’s big band at 18, until it was disbanded for economic reasons in 1958.

The solo break into Morgan’s feature on ‘Locomotion’ is a particular highlight, while he breezes through ‘Moment’s Notice’ and ‘Lazy Bird’, Coltrane compositions which contain incredibly complex and challenging harmonic material for the time.

By now he was starting to lead frequent sessions for Blue Note.

The Cooker (1957) is the first album to include compositions penned by Morgan, while Candy (1957/1958) focuses on lesser-played American Songbook material in a rare quartet outing, with Lee as the sole frontline instrument.

Peckin’ Time (1958) is a swinging session with Hank Mobley as co-leader.

In 1958 he was invited to join Art Blakey and The Jazz Messengers, perhaps the music’s most notable apprenticeship scheme, in an edition of the band that featured fellow Philadelphians Benny Golson, Bobby Timmons and Jymie Merritt.

The bluesy, call-and-response title track of their first album together, Moanin’, was an instant success, and Morgan’s opening solo must be one of the most immediately recognisable in all of jazz.

Rhythmically supple and filled with expressive articulation, it has been transcribed by countless budding jazz trumpeters since.

Golson’s ‘Blues March’ and ‘Along Came Betty’ from this record have also become jazz standards.

This version of The Messengers, now with Wayne Shorter on tenor saxophone instead of Golson, recorded a number of other classic albums during these few years, prior to Morgan’s departure in 1961.

Blakey encouraged his young sidemen to develop their own personal artistic voices, and also to compose and arrange material for the band, and A Night in Tunisia and The Freedom Rider both contain multiple Morgan originals.

Jazz Messengers!!!!! (1961) is more of a standards-based affair, with the band expanded to a sextet with the inclusion of trombonist Curtis Fuller, who had played with Morgan on Blue Train four years earlier.

Morgan would return to The Messengers, which toured extensively, for a second stint in 1964. Retaking the trumpet chair from Freddie Hubbard, he recorded a further five albums with the band, as it headed in something of a ‘soul jazz’ direction, before he left for good in 1965.

Meanwhile, he had continued to record under his own name during his time with Blakey’s band.

Unlike some other labels, during this period Blue Note paid its artists to rehearse prior to recording sessions, and encouraged them to bring in original material, which is one of the reasons it produced so much high quality, forward-thinking music during the 1950s and ‘60s.

In 1963 he recorded his most well known album: The Sidewinder

The title track of this album – a funky, boogaloo-flavoured 24-bar blues – became a surprise mainstream hit, reaching the pop charts as a single and helping the album to become Blue Note’s biggest seller.

This was the first time that Morgan had played with rising star tenor player Joe Henderson, and with these two fronting a rhythm section of Barry Harris, Bob Cranshaw and Billy Higgins, the set of original compositions by the bandleader is one of the best jazz records of all time.

A number of subsequent Morgan albums would repeat the formula of opening with a ‘Sidewinder’-esque funky blues, although none would replicate its level of commercial success, which he later described as being “like a gift from God”.

Morgan continued to lead fantastic sessions through the mid 1960s.

Search for the New Land (1964) goes in a slightly more left-field direction with an extended opening track, while The Rumproller (1965) continues his fruitful collaboration with Joe Henderson.

Cornbread (1965) features the memorable Latin-tinged ‘Ceora’ and a bluesy take on the Harold Arlen song ‘Ill Wind’, with particularly strong work from Herbie Hancock on piano.

Half of the numbers on Delightfulee (1966) feature a big band, in a rare move away from his usual quintet or sextet instrumentation, and there’s also a somewhat unexpected rendition of Lennon and McCartney’s ‘Yesterday’.

Even by the extremely high standards of 1960s Lee Morgan albums, the band on The Procrastinator (1967), which for some reason wasn’t released until 1978, is exceptional: Morgan, Hancock and Shorter, plus Bobby Hutcherson on vibraphone, and Ron Carter and Billy Higgins in the rhythm section.

Morgan led a fast-paced life, touring relentlessly from a young age, and, like many jazz musicians of the era, he had developed an addiction to heroin early in his career, possibly under the influence of Art Blakey.

He had been pawning his possessions to buy drugs, and at one point he burned his head badly after passing out against a radiator.

At some point during the 1960s (accounts vary as to exactly when), he met Helen Moore, who would become his common-law wife.

She was a friend to numerous musicians, her apartment acting as a kind of artistic salon and hangout. 13 years older than Morgan, she began acting as his manager and booking agent, and looked after him when he was in a dark place, helping him to at least manage his drug habit.

On 19 February 1972 he was in the midst of a week-long engagement at Slugs’ Saloon, a club in Manhattan, when an altercation started between Lee and Helen (over Lee’s new lover). It culminated in Helen shooting him after he had thrown her out into the snowy street.

He bled to death in an ambulance, which was slow to arrive due to the weather conditions.

The relationship between Helen and Lee Morgan was complex.

Ahamefule J. Oluo writes that, “No one who really knew Lee has any doubt that Helen saved his life… Helen was both Lee’s savior and his doom”.

The 2016 documentary I Called Him Morgan features recorded interviews with Helen, portraying her sympathetically, and is highly recommended.

Lee Morgan was only 33 when he died, but his trumpet playing – which always prioritised swing, a singing tone, expressiveness and the blues – was heard on 25 albums under his own name for Blue Note Records, a handful for other labels, and on sessions led by Stanley Turrentine, McCoy Tyner, Elvin Jones, Wayne Shorter, among others.

In the last few years of his life he had taken a more active interest in politics, campaigning for further visibility for black performers on television with the Jazz and People’s Movement, and becoming involved in the civil rights movement.

He left behind a widow, Kiko Yamato, whom he married in 1960. Although their whirlwind romance only lasted a very short time, they never divorced, which possibly explains why he and Helen never married, although she took his surname and he apparently referred to her as his wife.