A foray into singing saw his popularity crossover into the mainstream, no doubt helped by record labels sensing a marketing opportunity in his striking looks. However, he was beset by personal problems and addiction, spending time in prison before his mysterious and untimely death in 1988.

That said, he had experienced something of a musical renaissance prior to this, with aficionados rating some of his later European work alongside his classic early recordings with Gerry Mulligan’s influential chordless group, his own quartet featuring Russ Freeman, and the live takes with the great Charlie Parker. 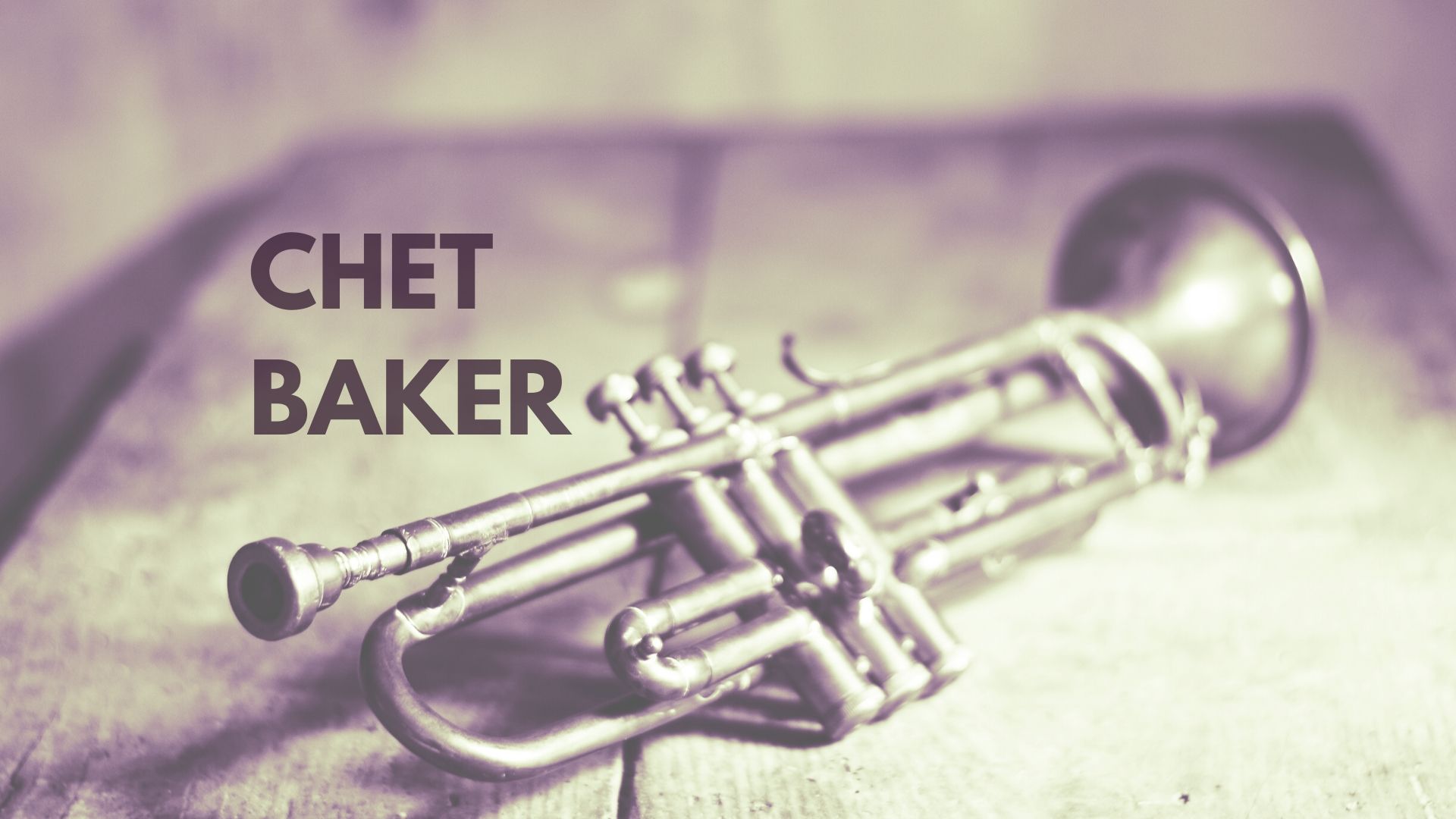 Chesney Henry Baker Jr. was born on 23 December 1929 in Yale, Oklahoma to musical parents, before the family moved to California when Baker was 11.

After briefly attempting to learn the trombone at the behest of his father, a Jack Teagarden fan, he found himself better suited physically to the smaller trumpet. Chet apparently took to it with little effort, showing immediate talent, although his knack for learning melodies quickly by ear actually hindered his efforts to read music.

Chet in the army

Chet joined the Army aged 16, receiving a posting in Berlin, where he joined the 29th Army Band. Upon leaving the military he returned to Los Angeles and enrolled at El Camino Community College for a stint of formal music education, before dropping out in his second year after being told by a teacher that he would never make it as a musician.

Meanwhile, he had been attending jam sessions and sitting in on gigs with Jimmy Rowles, Art Pepper, Dexter Gordon, Shelley Manne and other top L.A. musicians.

He re-enlisted into the Sixth Army Band in San Francisco, before marrying his first wife, Charlaine, whilst on leave in Las Vegas, and then feigning mental health problems in order to secure a discharge from the military only a few months later.

In 1952 Charlie Parker came to the West Coast for some club dates as a star soloist. Baker was now working as a professional musician in L.A. with the likes of Stan Getz and Vido Musso, and when Parker heard him at an audition he hired the trumpeter to play in his quintet.

A short, posthumously published memoir, As Though I Had Wings, describes his time with Bird fondly: the saxophonist could be wild and eccentric, but he treated the young jazz trumpeter warmly and protectively. This musical meeting is documented on the album Live at the Trade Winds, although the sound quality is not ideal.

That same year Chet joined the quartet of Gerry Mulligan, the baritone saxophonist and arranger, who had already found acclaim for his contributions to Miles Davis’ Birth of the Cool.

The new group became a huge success, epitomising the ‘cool jazz’ trend of the era, which developed as an alternative to ‘hotter’, arguably more Afrocentric, jazz styles more typically associated with the East Coast (although it is worth noting that much of this terminology was used more by journalists than by musicians themselves).

However, the Mulligan quartet did have a new and unusual sound, not least due to its lack of a harmony instrument – the group was composed of baritone saxophone, trumpet, double bass and drums; no piano or guitar.

On tracks like ‘Makin’ Whoopee’, ‘Love Me or Leave Me’ and ‘Bernie’s Tune’ the two front-line instruments accompany each other, often weaving a Baroque-like counterpoint over the walking bass and drums. The music is subtly swinging, but the drums are played relatively quietly on brushes by Chico Hamilton or Larry Bunker.

These sessions also contain Chet’s first recording of the Rodgers & Hart ballad ‘My Funny Valentine’, which became a hit and something of a signature tune for the rest of his career.

The quartet had not been existence for long when, after an 11-month engagement at The Haig in Hollywood, Mulligan was arrested on drug charges. Chet formed a quartet of his own, recording a number of bright and breezy compositions by Russ Freeman, the band’s pianist and musical director, including ‘Maid in Mexico’, ‘Batter Up’, ‘No Ties’ and ‘Happy Little Sunbeam’.

Baker was starting to find wider fame, winning readers’ polls for ‘Best Trumpeter’ in Metronome and Downbeat Magazines above the likes of Miles Davis. Davis later suggested that racism was at play here, noting the influence of his own style upon Baker’s lyrical, introspective playing.

Chet Baker Sings (1954) saw him make his vocal debut on a set of Songbook standards, which divided opinion at the time. His voice is light, vulnerable, perhaps even androgynous, and sounds unlike any singers who had preceded him.

A vocal ‘scat’ solo on the title track of It Could Happen To You (1958) sums up his talent and appeal, in that one could imagine hearing the same melodic content coming from his trumpet: Chet simply plays what he hears in his ‘mind’s ear’, with both his playing and singing eschewing showy displays of technique, or preconceived content, in favour of pure, romantic mid- register melody.

In 1955 he took an acting role in the film Hell’s Horizon, but the experience bored him. The following year he went to Paris to perform with a newly assembled quartet, in part to be with Liliane Rovère, with whom he had been having an affair until her US visa expired, forcing her to return to France. His new band featured the talented young pianist Dick Twardzick, who tragically died of a heroin overdose part way through the tour.

Chet himself, like many jazz musicians of the era, began using drugs at some point during the 1950s, although exactly when varies according to different accounts. At any rate, his addiction to heroin and other substances would put a terrible strain on the rest of life.

A number of records from the late fifties see Baker in fine form and accompanied by best-of-the-best New York musicians. Chet,  Chet Baker In New York & Chet Baker Plays The Best of Lerner and Loewe are all worth seeking out, featuring, variously, Bill Evans, Johnny Griffin, Paul Chambers and Philly Joe Jones.

Now touring more frequently in Europe, he recorded Chet Baker in Milan and Chet Baker with Fifty Italian Strings with local musicians in 1959.

By this time he was married to his second wife, Halema, and experiencing increasing narcotics-related legal trouble as his addiction worsened. He spent time incarcerated on Rikers Island and later in Italy. It was in Italy, where he spent significant amounts time, that he met an Englishwoman named Carol, who would become his third wife.

In 1966 his teeth were damaged when he was badly beaten by drug dealers in a dispute over money in San Francisco, which led to the decline of his trumpet embouchure. He recorded Albert’s House (1969) and Blood, Chet and Tears (1970), clearly in poor shape physically, and experimenting with a new repertoire of fusion and covers of contemporary pop songs; these are not his most acclaimed efforts.

This preceded a complete break from performing and recording in the early 1970s while he had dentures fitted and relearnt to play, meanwhile working long hours as a gas station attendant.

Making a comeback in the mid 1970s, he returned to playing more straight-ahead, standards-based material with major American musicians like Paul Desmond, Jim Hall and Ron Carter. In 1978 he moved to Europe, where he would reside for the last 10 years of his life, performing and recording prolifically.

There is some excellent music to be found amongst these later cuts: a live reunion with Stan Getz from 1983 is available on YouTube, and Mr. B., from the same year, features a virtuosic solo on ‘White Blues’ in the drummer-less trio format that he often favoured during this period.

Chet Baker in Tokyo (1987) is particularly acclaimed, while Charlie Haden’s Silence (1987) is a lovely quartet outing with Chet soloing in front of Haden, Billy Higgins and Enrico Pieranunzi. He also enjoyed high profile collaborations with Elvis Costello and Van Morrison.

The final years of Chet Baker

The 1987 documentary Let’s Get Lost emphasises the stark contrast between the photogenic beauty of Baker’s early life – wonderfully captured in William Caxton’s book Young Chet: The Young Chet Baker – and his sunken appearance later on. Though only in his late fifties, he appears much older, his body ravaged by years of substance abuse.

On May 13 1988 he was found dead in Amsterdam, having fallen from his hotel room window.

How did Chet Baker die?

Drugs were present in his system and many theories have been put forward as to exactly what happened that night. One seemingly credible suggestion is that, upon becoming locked out, he entered the adjacent bedroom to try to access his own room via the balcony, falling to his unfortunate, accidental death. He was 58.

Given his lifestyle, Chet’s relatively early death is hardly surprising, but the beauty of some of his late-period work makes one wonder what he might have produced had he lived longer.

Throughout his career his best playing was considered, genuinely improvised and truly melodic. As a talent and cultural icon, critic Dave Gelly memorably likened him to “James Dean, Sinatra, and Bix, rolled into one”.

Sam Braysher is an alto saxophonist based in London. His debut album was a critically acclaimed duo recording with New York pianist Michael Kanan. A new trio album, with bassist Tom Farmer and drummer Jorge Rossy, is due for release in September 2020.